Surprisingly little has changed in the forty years since the British architectural historian Reyner Banham wrote Los Angeles: The Architecture of the Four Ecologies (the beach, the freeways, the flatlands and the foothills). This definitive tribute to Los Angeles is an easy reading and an excellent primer for anyone coming to LA. In 1972, shortly after the initial publication, the BBC produced a highly viewable documentary showing Banham, as narrator, enjoying LA. The video can be viewed on YouTube by clicking the following link – http://www.youtube.com/watch?v=WlZ0NbC-YDo. Although 52 minutes in length, it is fascinating.

Esther McCoy is a perceptive architectural historian active at the birth of midcentury modernist design. She worked for R M Schindler in her early career before becoming a full time essayist and critic. Reyner Banham said “no one can write about architecture in California without acknowledging her as the mother of us all”. Susan Morgan has assembled a collection of her essays, letters, articles and lectures, Piecing Together Los Angeles: An Esther McCoy Reader, that spans from her early years in Greenwich Village until 1989. This collection is a good companion to Banham’s The Architecture of the Four Ecologies.

Authors David Gebhard and Robert Winter have written the most comprehensive guide to architecture in Los Angeles County available today, An Architectural Guidebook to Los Angeles. First published in 1965, the guide is in its fifth edition, 2003. Much has happened since that time but as a single source of information, including addresses, this guide is invaluable.

California, and by extension Los Angeles, has a long and interesting history beginning in the early 16th century. Many countries and their nationals have influenced its development – Spain, Mexico, England, France, Russia, Ireland, Switzerland and, of course, the United States. California is an easy reading epic of the state’s history by Kevin Starr, a University Professor at the University of Southern California in Los Angeles. He came to prominence during his tenure as State Librarian from 1994 to 2004.

Christopher Hawthorne has been the LA Times architectural correspondent since 2004. His reports and essays are thoughtfully critical and astute. His passion for architecture and urban planning is infectious. The following link will take you to his articles. http://www.latimes.com/entertainment/news/arts/et-hawthorne-sg,0,3749832.storygallery

The last film Roman Polanski made in the US before fleeing to Europe was Chinatown in 1974. The story is set in Los Angeles in 1937 and was inspired by the disputes over land and water rights going back to the 1910’s and 20’s when William Mulholland effectively stole water from the Owens Valley north of LA. This “noir” mystery stars Jack Nicholson, Faye Dunaway and John Huston. Besides being a compelling story, it provides fairly historically accurate information about the importance of water to the Los Angeles area.

Want a good read for a long flight to Los Angeles or back home? Michael Connelly writes solid mysteries based in LA. You will read about places like the Valley, Sepulveda Boulevard, the 101 freeway, Hancock Park, Melrose Avenue and other places you may encounter on an Entasis tour.

Perhaps the greatest architectural photographer is Julius Shulman. Shulman began his career in 1936 when his casual photographs of Richard Neutra’s Kun House led to introductions to RM Shindler and Rafael Soriano, along with continuing commissions from Neutra and many others over 70 years. Shulman died in July 2009 at the age of 98 and when he was still active professionally. Any book on Shulman’s work is a delight.

Tim Street-Porter’s photographs are a textbook example of the importance of composition and early morning or late afternoon light to a successful photo, especially of architecture. Many of LA’s iconic as well as quirky images are included. 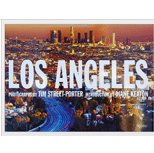